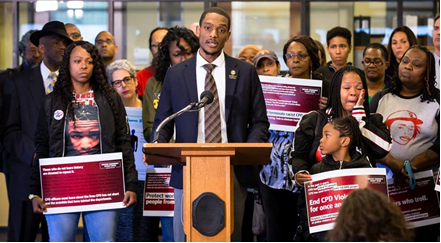 Network 49 is excited about this week’s federal court ruling to approve & oversee a Chicago Police Consent Decree. After almost two years & 1000s of hours of volunteer time, this marks a real victory for the people of Chicago who have fought tirelessly against unchecked police brutality.

This historic development came about ONLY because of the work done by The Campbell Plaintiffs, members of a class action lawsuit which includes Network 49 & nearly a dozen other community groups and individuals who have also been most impacted by CPD racist violence. Network 49 members Ted Miin, Emile Junge, and I have been proud to represent our organization in this work.

We are grateful for the Court’s recognition of the need for federal court oversight of the Chicago Police Department (CPD) to address years of civil rights abuses that have disproportionately targeted Black people in Chicago. While the decree is far from perfect, it is an historic step toward addressing the CPD’s ongoing civil rights abuses.

Attorney Craig Futterman, who is on our legal team, noted, “As we knew from the beginning, a consent decree is not a cure-all for the CPD’s decades of unchecked abuse. But it is a powerful tool that we’ve never had before in a larger fight for justice. Under the decree, we won a victory never won by anyone before in one of these government decrees: the right of community-based organizations to enforce the decree in court. That’s a really big deal.”

NEXT STEPS
The Court hasn’t yet entered the actual decree. The federal court judge acknowledged that this Decree did not go as far as we had advocated, but said it can be modified over time as needed . The judge also acknowledged that the Decree is only one tool in the struggle for change. We’ve got more work to do.

Network 49 is a progressive, community-led, political organization committed to organizing and advocating for policies and elected leadership that advance a high quality of community life, benefiting all residents in the 49th Ward of the City of Chicago.